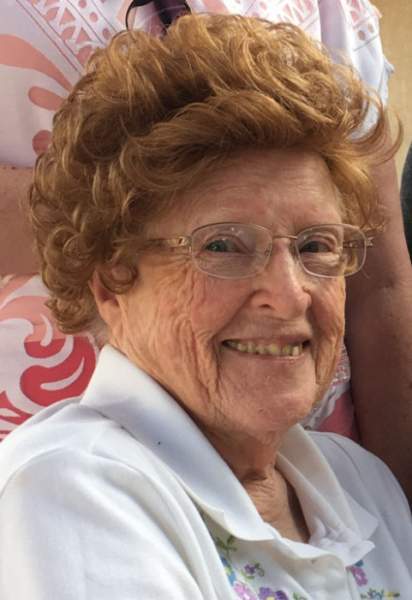 Gloria Ruth Peterson Yates, 90, of Gunnison, UT passed away February 2, 2022 in Centerfield, UT.  She was born July 2, 1931 to Charles Lorenzo and Louise Hackwell Peterson in Ephraim, UT, the second of four children.

Gloria’s early childhood was spent in Monticello, Boulder, and Summit Point, UT.  She attended a one room school, grades 1-8, in Boulder.  The family moved to Gunnison Valley around 1940 and she graduated from Gunnison Valley High School in 1949.

She worked as a secretary for Vearl A. Peterson Chevrolet until 1958 when she moved to Salt Lake City and worked as a secretary for Streator Chevrolet and became office manager for many years. She met J. Mac Yates while he was the shop manager at Fred A. Carlson’s Cadillac, across the street from Streator’s, and they were married on September 6, 1964.  Their marriage was solemnized in the Jordan River Temple, November 17, 1984.  Mac preceded her in death August 20, 2016.

Gloria and Mac lived in Murray the early years of their marriage, and spent much of their free time at Flaming Gorge camping and fishing.  They also hunted deer in 12 Mile Canyon.  In 1980, Gloria started working for South Jordan City where they built a home on a large piece of ground.  They enjoyed gardening, raising chickens, and canning the produce from their garden and orchard.  Gloria also supported Mac in his many craft projects.

In 2007 they started their last big project, building another new home, and moved to Gunnison in October 2008.  They moved into Mission at Community Living Center in August 2016, shortly before Mac’s passing.

Gloria loved cooking, baking and hosting large family dinners.  She also was an excellent seamstress and sewed clothes for her nieces and nephews.

Her world revolved around her husband, Mac, and her nieces and nephews.  She was dearly loved and will be missed.

Gloria is survived by numerous nieces and nephews.  She is preceded in death by her husband, parents, and brothers, Charles H., Lee and Ivan.

Funeral services will be held on Saturday, February 12, 2022 at 11:00 a.m. in the Magleby Mortuary, Manti.  Interment services will follow in the Gunnison Cemetery.  Live streaming of the services and online guestbook can be found at www.maglebymortuary.com under Gloria's obituary. Funeral Directors: Magleby Mortuary, Richfield, Salina and Manti.

Streaming is LIVE only --- can only be viewing during the services.  Scroll to the bottom of the obituary until you get the streaming box, click on the arrow and when the services start, you can view. (Box will not be placed until the day of the service.)

To send flowers to the family or plant a tree in memory of Gloria, please visit our floral store.

To order memorial trees or send flowers to the family in memory of Gloria Ruth Yates, please visit our flower store.