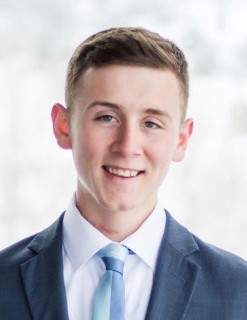 Benjamin Jackson “Jacko” Hill, 19, our fearless, brave, courageous, faithful, son, brother, cousin, grandson, friend, confidant, and hero, passed away peacefully in the arms of his mother and father, surrounded by his family, after an honorable battle in which he never wavered.

Jackson was born in Gunnison, Utah November 1, 2001, to Ben and Megan Hill. He is the second of four children. In his earliest days he could be found with a Ben 10 character, preferably Humungousaur or Jet Ray, but soon traded them in for anything with a ball. With a keen eye, and uncanny reflexes, Jackson quickly excelled at baseball and basketball. He had the opportunity to compete with the best kids his age, and never backed down. He forged some of his dearest friendships during this time, turning teammates into brothers. He always had the ability to bring the best out of everyone around him, a trait which would serve him well.

In 2015, after a series of doctor consults, Jackson was diagnosed with atypical spinal meningioma. For the next six years he would battle this disease though countless surgeries, and hospital stays, always keeping his fighting spirit alive. It was during this time that he also met a great man who would give us 6 more amazing years of Jackson.  Dr. Douglas Brockmeyer’s knowledge and precise surgical skills, physically saved Jackson’s life many times.  Once the surgical options were exhausted he was cared for and mentored by the greatest oncologist of all-time and forever friend,  Dr. Nicholas Whipple.  In addition, the countless nurses and other specialists that attended to Jackson, will forever hold a special place in his family’s heart.

Despite various physical limitations caused by his numerous surgeries, Jackson continued to compete at the highest level. He excelled at basketball, playing at the varsity level, even being selected to the All State team his junior year. During his early high school years he also developed a love for track. He had a passion for seeing how hard he could push his body and for stretching his personal limits. His brothers and cousins could often be seen pacing Jackson on their bikes or four wheelers, because they knew they could not keep up with his cross country, or 800 meter pace.

As Jackson’s physical abilities began to decline, his persona blossomed. He was a soft spoken young man, whose spirit and passion for life, friendship, and love, radiated stronger each day. Everywhere he went, people were drawn to him. His understanding of life was well beyond his years, which made him so special. When combined with his quick wit, and inspiring life experiences, Jackson’s discussions were unmatched. Like his smile, his zest for life, and his fighting spirit, was contagious. Entire communities, rival schools, and even complete strangers, felt compelled to join in his quest. From Coalville to Kanab, its not uncommon to see kids and adults wearing a ‘Fight for Jacko’ shirt because they wanted to be a part of what he was all about.

In addition to his love for athletics, Jackson cherished his time with family and friends. He loved the annual Lake Powell “Boy’s Trip”, playing games with his brothers, hanging out with friends, watching Legolas’ keen bowmanship in Lord of the Rings, and cheering on his Kansas Jayhawks. He had the unique opportunity in 2019 to share his story with Coach Bill Self, and the rest of the Jayhawks, during a very personal visit to Allen Fieldhouse. It was truly a once in a lifetime opportunity for him.

Jackson was a proud graduate of Gunnison Valley High School, where he was a student body officer. He was a faithful member of The Church of Jesus Christ of Latter-day Saints and was recently ordained to the office of an Elder. He is now serving all of those who passed on before him, including some close friends and relatives, and can once again run and do all those things that brought him joy in this life. You will be missed Slim, but we know we will see you again!

Funeral services will be held Monday, May 17, 2021, at 12:00 Noon in the Gunnison Stake Center, 80 West Center. A viewing will be held at the stake center on Sunday, May 16, 2021 from 5:00 – 8:00 p.m. and Monday from 10:00 -11:30 a.m. Live streaming of the services and online guestbook can be found at www.maglebymortuary.com under Jacko’s obituary.  Burial will be in the Gunnison Cemetery. Funeral Directors: Magleby Mortuary, Richfield, Salina and Manti.

To order memorial trees or send flowers to the family in memory of Benjamin "Jacko" Jackson Hill, please visit our flower store.