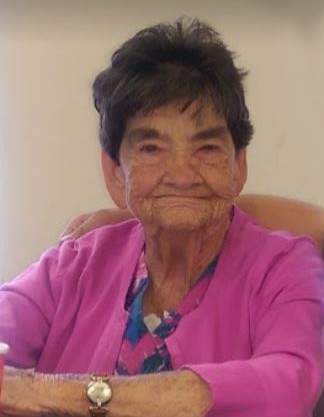 Our beloved mother, grandmother, great-grandmother and aunt, Betty Jane Dickinson McEwen Brown, age 96, graduated from mortality on Thursday, October 21, 2021, at the Garfield County Care Center in Panguitch, Utah. Betty was born on August 10, 1925, in Panguitch to Joseph Leland and Lula Elizabeth Baker Dickinson. She was the eighth of ten children. Betty married Eugene J. McEwen on August 1, 1946. He preceded her in death on July 17, 1953.  They had three sons together: Stanley, Bruce and Steven McEwen.   Betty later married Merwin Osborne Brown on December 7, 1956. They were sealed in the St. George Temple on July 20, 1966. They also had three sons together: Randy, Danny and Vance Brown.  Merwin preceded her in death on December 18, 1992.

Betty lived her entire life in Panguitch. She was active in The Church of Jesus Christ of Latter-day Saints, had a strong testimony of Jesus Christ and held many callings.  She was hard worker who always took care of others, volunteered her time and resources to the hospital, the care center, the thrift store, and performed acts of compassionate service over the course of her lifetime.  She was an example of selfless service, sacrifice and hard work to all who knew her.  Betty was a wonderful cook, famed for her homemade rolls. She loved her sons and grandchildren and was happiest whenever they were around.

Betty provided care services for the elderly in Panguitch long before the care center existed. Years later, Betty volunteered her services to the residents of the Long-Term Care Center at Garfield Memorial Hospital, where she eventually became a resident six years ago, where, according to her, she was still helping to care for the other residents.  Her family wishes to extend their sincere appreciation to her loving friends, home and visiting teachers, her bishop and branch president, and others in Panguitch with whom she shared a long history.  We especially appreciate and thank the wonderful, skilled, caring nurses and physicians at the care center who have so kindly tended to Betty over the past six years - especially those who took such excellent care of Betty during the last years of her life and treated her with love, respect and compassion.  Your many kindnesses to her are greatly appreciated.

Funeral services will be held Saturday, October 30, 2021 at 11:00 a.m. in the Panguitch 1st Ward Chapel, 550 S 100 W, where friends may call from 9:30 - 10:30 a.m. Burial will be in the Panguitch City Cemetery. Funeral Directors: Magleby Mortuary, Richfield, Salina and Manti. Online guestbook at www.maglebymortuary.com

To send flowers to the family or plant a tree in memory of Betty, please visit our floral store.

To order memorial trees or send flowers to the family in memory of Betty Jane Brown, please visit our flower store.