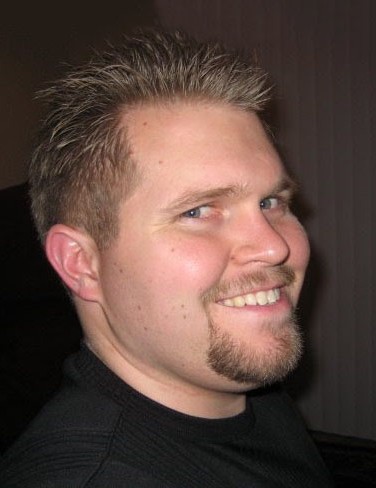 
Our Brigham was born July 25, 1984 in Pinesdale, Ravalli County, Montana to Robert R. Openshaw and Joan Elizabeth Carroll. He was one of 13 children. He was his mother’s youngest child. He specifically brought a lot of love to the family from the first day. He was always joyful and happy.
He lived in Montana until he and his family moved to Tucson, Arizona in 1991. He spent his school years there and graduated from Desert View High School. His father got into book publishing in 1981 and from an early age Brigham was totally interested in computers and having time at the keyboarded. With six older brothers in control in Montana, he got little computer time. After he moved to Tucson, there was only one older brother who challenged him for computer hours, and Rex spent all his time wrestling. This was a smallest brother’s dream! Brigham at 7 and for many years following spent a lot of his time helping his father scan and typeset books.
Brigham was home schooled for a period and then he attended public school. Learning always came easy for Brigham and therefore he always carried good grades, doing well in his classes. In May, 2002 Brigham graduated from Desert View High School in Tucson, Arizona.
In 2003, his family moved to Riverton and then to West Jordan, Utah. Once more, Bigham was working on his computer constantly. He loved playing games, as well as studying anything he could learn about the science of computers.
His early work history took him to Washington, Mississippi, and California.
In 2004, he went to a Salt Lake City real estate school where he received his license and worked for a time with ReMax Realty. He then started working as a dispatcher at Peake Alarm with his brother Benjamin in 2005, and later advanced to fire alarms where he excelled. In 2008, Brigham moved to St. George where he continued working as a fire alarm technician at Peake Alarm. In 2009, he changed employers and worked for Mountain Alarm who then transferred him in 2011 to Denver, Colorado.
In 2015, Brigham changed employers again to Johnson Controls where he worked in fire security. He bought a condo in Denver that same year. In 2018, he began working for Johnson Controls as a controls technician. Whatever job Brigham took on, he always excelled at it.
In September, Brigham was admitted to a Denver hospital with cellulitis and edema in both legs. He suffered greatly with this condition. He was released and went back to work for a period, but in November was admitted back into the hospital with edema. On January 6th, Brigham failed to show up at work and his friend Erik found Brigham laying on the floor of his condo unresponsive. The EMT’s took him to the hospital where he valiantly struggled for his life. He succumbed peacefully to his conditions on January 25th surrounded physically and electronically with all his adoring family. He will be missed greatly by family and friends.
Brigham is survived by his parents; siblings, Joseph Robert Openshaw, Sean LaMar Openshaw, Jonathan Reid Openshaw, Rachel Ann Behling, Benjamin Franklin Openshaw, Janette Faye Openshaw, Deborah Eve Rebson, Naomi Elizabeth Kralovetz, Rulon Robert Openshaw, William Clifford Openshaw, Leah Pauline Reynoso.  He is preceded in death by his grandparents, John S Openshaw, Eula Pauline Martin, George Franklin Carroll, Henrietta Faye Swasey, Sue Denham Openshaw, and brother, Jacob Israel Openshaw.
Funeral services will be held on Saturday, February 12, 2022 at 12:00 noon in the Manti 8th Ward Chapel, 300 South Main.  Friends may call prior to services starting at 11:00 a.m.  Burial will be in the Manti City Cemetery.  Funeral Directors: Magleby Mortuary, Richfield, Salina and Manti.  Online guestbook at www.maglebymortuary.com

To order memorial trees or send flowers to the family in memory of Brigham James Openshaw, please visit our flower store.