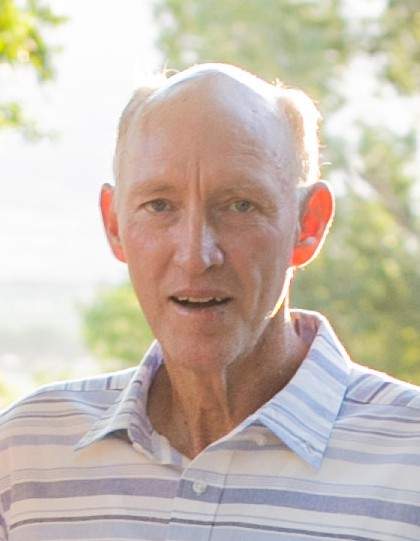 Carl Johnson, faithful son, loving husband, and devoted father and grandfather, peacefully slipped away into heaven at home with his wife and children by his side, on Monday morning, April 19, 2021, after a long and courageous battle with Parkinson’s Disease.

Carl was born in Panguitch, Utah on February 24, 1958, to Carl Ernest Johnson and Donna Mae Orton, the youngest of three siblings, his older brothers Tommy and Jimmy, and his older sister Debbie. Carl’s mother Donna was widowed suddenly while pregnant with Carl, so he never knew his dad. This loss later instilled in him a strong desire to love and serve others, especially other widows like his mom.

Growing up, Carl spent much of his time with his two brothers and cousins in the mountains, fixing up cars and cruising around the valley, and playing sports. He also developed a strong work ethic at a very young age that began with working at the local movie theater while he was in elementary school. These jobs helped him save for his first car that he purchased on his own at 15 years old.

While attending Panguitch High School, Carl worked extremely hard, was involved in student body, loved music and basketball, and was a friend to all. After high school, Carl served a mission for The Church of Jesus Christ of Latter-Day Saints in Pittsburg, Pennsylvania.

Upon his return from his mission, he attended Provo Technical College where he met the love of his life, Diane Vernon, from Woodruff. After a courtship and many trips from Panguitch to Woodruff, they were sealed for time and all eternity in the Provo Temple on March 27, 1982. Carl and Diane lived in Panguitch as newlyweds for 5 years and then moved to Monroe where he continued his 29-year career with UDOT. Carl spent a few years as a maintenance worker and was later hired as the Safety/Loss Control Coordinator in the Richfield office where he made many lifelong friends and served until his retirement. The Little Green Valley became their lifelong home.

Carl’s priority was always his kids, Lindsey and Ryan. He also quickly became a father figure to many kids in his neighborhood in Monroe. Most days after work or on the weekends, you would find Carl outside working in the yard, serving a neighbor, or playing ball with the kids. Carl would get up early three times every week before work to play basketball with his friends, his kids, and all their friends. Carl continued this tradition with younger generations until his body would no longer allow him to play the game. Carl was also a master of all trades and spent countless hours doing fix-up projects around the house and helping others.

Carl loved his grandchildren, KyLinn and Britton. To them, he was known as Grandpa Hoot. Carl loved sharing an ice cream with KyLinn and watching her dance. He and Britton did their best work outside shoveling snow, working in the man shed, and playing basketball.

Carl was a member of The Church of Jesus Christ of Latter-day Saints and served faithfully with the Young Men’s organization, Elders Quorum assignments, and as a ward clerk. He had a great love for and testimony of the Gospel of Jesus Christ. Carl will always be remembered as a gentle giant who worked hard, served others selflessly, loved his family, and loved the Gospel.

Carl is survived by his wife, Diane and children Ryan (Brandi)  and Lindsey. He is the proud grandpa to KyLinn and Britton. Also survived by his siblings and father-in-law, Ken Vernon. He is preceded in death by his parents, Carl and Donna Johnson; mother-in-law, Shana Vernon; niece, Crystal Robinson; nephew, Jeremy Mathews; and aunt, Alta Orton.

Funeral services will be held Friday, April 23, 2021 at 12:00 Noon in the Monroe 1st and 4th Ward Chapel, 49 E 200 N.  Friends may call Thursday evening from 6-8 p.m. at the Magleby Mortuary in Richfield and Friday at the ward chapel in Monroe from 10:30 - 11:30 a.m. Burial will be in the Monroe City Cemetery. Funeral Directors: Magleby Mortuary, Richfield, Salina and Manti. Online guestbook at www.maglebymortuary.com

The family wishes to thank Kevin Anderson, Stacey Hill and staff at South Sevier Clinic, Richard Chisholm, Julie Parker and staff at Chisholm Dental, and his neurologist Meghan Zorn at the University of Utah Neuroscience Center, for their many years of dedicated care.

To order memorial trees or send flowers to the family in memory of Carl E. Johnson, please visit our flower store.