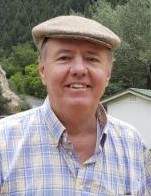 Curt was a member of The Church of Jesus Christ of Latter-day Saints. He served a mission in Ireland. He enjoyed all aspects of scouting. He was a Scout Master and served in many other positions within scouting.

Proceeded in death by grandparents: Jay and Emma Spencer, Chad and Carma Heppler.

Funeral services will be held Thursday, December 2, 2021 at 11:00 a.m. in the Richfield 16th Ward Chapel, 800 North 500 East. Friends may call Wednesday evening from 6-7 p.m. at the Magleby Mortuary in Richfield or Thursday morning at the ward chapel from 9:30 - 10:30 a.m. Burial will be in the Richfield City Cemetery. Live streaming of the services and online guestbook can be found at www.maglebymortuary.com under Curt's obituary. Funeral Directors: Magleby Mortuary, Richfield, Salina and Manti.

To send flowers to the family or plant a tree in memory of Curt, please visit our floral store.

To order memorial trees or send flowers to the family in memory of Curt Donnell Spencer, please visit our flower store.