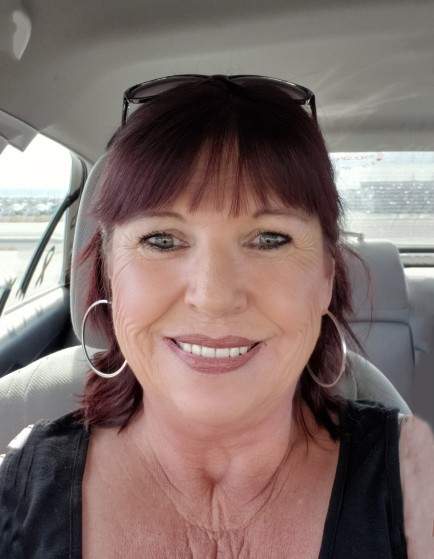 Debra Wynn Heaton, age 62, passed into the next life suddenly on March 1, 2021 from what the family believes to be natural causes, coming as a complete shock to everyone who knew her since she was so bubbly, positive and full of life right up until the moment she passed. Debbie was born on November 27, 1958 to Shirley Wynn and Keith Christensen and was the oldest sister to 7 siblings and enjoyed helping to raise some of her younger brothers and sister. She was later adopted by her step-father Ronald L. Mattinson. Debbie had the opportunity to live with her grandparents, Jack and Consie Wynn, for a few years until the age of 5 and some of her best childhood memories were during that time. She developed her love of fishing and indoor gardening from spending those early years with her grandparents, whom she loved dearly.

Debbie has 3 biological children: Mindy and Cory with her first husband; and Robert with her second husband. However, she was born to be a mom, and later a grandma, and became a “bonus” mom to many over the years, including her foster daughter, Sara, and helping to raise her niece, Danielle, for a time.

Debbie spent many years as a single mom and worked many different kinds of jobs to support her children and did everything from being a waitress, a secretary, working retail and even attended school to get her medical assistant license in 1986, all while raising 3 children on her own. However, her favorite job was as a waitress at Rocky’s Bar in Salt Lake City, because she worked with her sister, Teresa. Debbie cherished that time of living and working with Teresa, raising their children together and the amazing memories they made during that time.

Many of those years spent as a single mom, Debbie and her kids didn’t have much, but she was always able to find something fun to do with them, teaching them that often the best memories don’t have to cost anything. Singing in the car, or even in a restaurant, chasing rainbows, taking their huge Great Dane sledding, swimming at the lake, playing games or cards all day and even turning the need to use free hamburger coupons at different places all over the Salt Lake Valley to get enough to feed her kids into an adventure filled with tons of jokes and laughter.

Debbie told her children many times that she would have to date someone for at least a year before she would marry again. But, as they say, “If you want to make God laugh, make plans.” Debbie met the love of her life, Ed Heaton, March 4, 1992. They were engaged less than 2 weeks later on March 17th and married May 30th  that same year. When she married Ed, Debbie became a bonus mom to 4 more children: Shaun, Crystal, Danielle and Katrina, for a combined total of 8 children and they later adopted their grandson, Jack.

Debbie was a phenomenal grandma and most of her time was spent taking care of her grandchildren, even stepping in to raise them when necessary, and it was rare to see her without at least one, two, or ten of her grandchildren tagging along. She loved to spend time with family and was always trying to plan times to get together for pictures, a party or a trip. She looked forward to the yearly trips to Las Vegas for the Monster Jam World Finals with Ed and whichever of their kids and grandkids were able to join them and making sure to buy gifts for the grandkids who couldn’t go. She also looked forward to their family Christmas parties and would try to plan them perfectly. However, accommodating everyone in her large family was nearly impossible, and never seemed to go according to plan, so Debbie became the queen of what her son-in-law, Bob, dubbed the “un-plan”. She strove to make every event, every gift, every phone call and every visit special and memorable, often saying “You never know when today will be your last” and always had a camera nearby, in her hand or in front of her face to capture the memories and made sure to never leave or hang up the phone without an “I love you”.

Upon her departure from this world, Debbie was reunited with both her fathers: Keith Christensen and Ron Mattinson; father-in-law, James Heaton; grandparents: John and Consie Wynn; brothers: Danny Mattinson, Troy Mattinson and Cory Christensen and many other grandparents, aunts, uncles, cousins, family members and friends.

Debbie recently expressed her wishes to be cremated to her family, so the family has made plans for a simple viewing for family and close friends on Friday March 5 from 6:00-7:00 pm at the Magleby Mortuary in Richfield.

There will be a Celebration of Life Memorial service on Saturday, March 6, 2021 at 12:00 Noon in the Sigurd Ward Chapel, 30 S 100 W, Sigurd, Utah. The family will have an “open mic” period during the Celebration of Life and would welcome anyone to share a short story, memory or thought, should you wish. Both the viewing and service on Saturday will be casual and following the “un-plan”, so please wear whatever you are comfortable in. Cremation services will follow in the Magleby Mortuary Crematory.  Online guestbook at www.maglebymortuary.com

The family would like to thank the paramedics, the Sevier County Sheriff’s office, Magleby Mortuary, Bishop Ross and the Relief Society of the Sigurd Ward of The Church of Jesus Christ of Latter-day Saints, as well as all those who have reached out with their thoughts and prayers during this difficult time

To order memorial trees or send flowers to the family in memory of Debra Heaton, please visit our flower store.