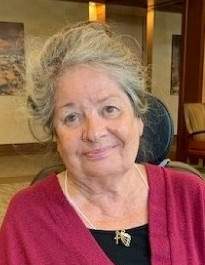 Angie graduated in the class of 1966 from Minico High School in Rupert, Idaho. She attended beauty school in Salt Lake City, Utah where she worked as a hairdresser. She also worked as a bartender where she met her husband Jerry. They spent 38 years devoted to each other, loving and enjoying their life together.

One fall morning while at work, Angie experienced a cerebral hemorrhage. She was left with paralysis on her right side. For many years she received extensive physical therapy to relearn everything we all learn from the time we are born. Angie worked hard every day and adapted her skills to her abilities. She was very artistic. She expressed her creativity with one handed needlework, sewing and jewelry making. She invented clever ways to make things happen. She loved flowers and plants. Living with limited mobility did not stop her from being and doing anything she wanted to do. She would be outside in the sunshine whenever possible racing around in her motorized wheelchair.

Angie was a force to be reckoned with. In her younger days she enjoyed playing golf and shooting pool. She was always up for a game of dominoes and put together countless puzzles. She would not give up until each one was 100% complete. She had a life full of energy and maybe some mischief also! Angie was a wonderful friend. She was kind, generous and always took time to listen and engage others in conversation. She made us laugh and her laugh was loud and contagious. She never held back her audible and authentic joy with children. She was one of Heaven’s angels.

Angie is survived by her two sisters: Gayle (Brian) Hill, Portland, OR; and Martha Nett, Otis Orchards, WA. Her husband Jerry preceded her in death August 30, 2010. She is also preceded in death by her parents and numerous other family members.

We wish to thank the staff, caregivers, medical providers and friends from Sagewood At Daybreak who surrounded her with love. You treated her with the upmost respect and dignity and that does not go unrecognized. She was also given much assistance and support from her neighborhood friends while still living in her home.

We have fulfilled Angie’s request to be cremated. We will celebrate and honor her life on Friday August 19, 2022 at 3:00 pm at Sagewood At Daybreak 11289 South Oakmond Road, South Jordan, Utah 84009. Funeral Directors: Magleby Mortuary, Richfield, Salina and Manti. Online guestbook at www.maglebymortuary.com

To order memorial trees or send flowers to the family in memory of Elane Ann Liedtke, please visit our flower store.