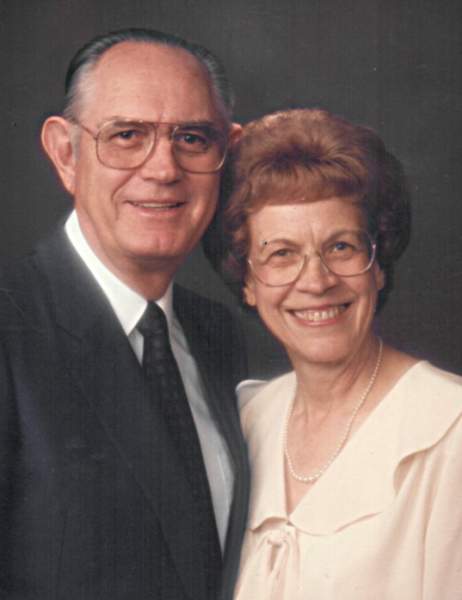 Elsie Carol Ogden Nuffer, age 95, passed peacefully in Washington, Utah on Saturday December 4, 2021. For the last 2 years, she has been living with her son David and daughter-in-law Lori. Carol was proudly born in Richfield, Utah, on December 25, 1925, to J. Lerue and Elsie Ward Ogden. Though she lived in Portland, Oregon; Naperville, Illinois; and Toronto, Canada; Richfield was always “home.” She thrived on the memories of family and friends through the years in Richfield till she attended the University of Utah and then served a mission in the Northwestern States. On her mission, she started a Latter-day Saint Primary for the children in Buckley, Washington; worked in the mission office; and met her future husband, W.  Peter Nuffer. They married in 1948 a few months after her release.  They have two children, David and Mary Ann. Mary Ann passed away in 2000, less than two years after Pete died in 1998.

Carol’s life was marked by achievement in school, work, and church service. She served 23 years in temples, including Manti and Washington, D.C. She also loved the outdoors, whether in Utah, Oregon, Canada, or Europe.

After spending time in so many places she was pleased when she and Pete retired to Richfield in 1986. They renovated the family home on the corner of 200 South and 100 West, known for the landscaping she maintained.

Carol was also preceded in death by her father, mother, siblings: Howard (Virginia), Dale (Joy), Geraldine (Jack) Ragsdale, Glen (Delles), and Arlene (Gary) Malchus. Of her siblings she is survived by her sister Frances (Bob) Chiea. She is survived by many grandchildren and great-grandchildren.

Special thanks to Applegate Hospice and particularly Susan Grisier and Beehive Homes at Coral Canyon for their wonderful assistance.

Graveside services will be held Saturday December 11, 2021 at 2:00 p.m. in the Richfield City Cemetery, southwest corner. At her repeated written and verbal insistence, and to keep solemn promises, no funeral will be held.

Those wishing to honor her memory, may consider contributing to The Church of Jesus Christ of Latter-day Saints Humanitarian Aid Fund, which she always supported.

To send flowers to the family or plant a tree in memory of Elsie Carol, please visit our floral store.

To order memorial trees or send flowers to the family in memory of Elsie Carol Nuffer, please visit our flower store.