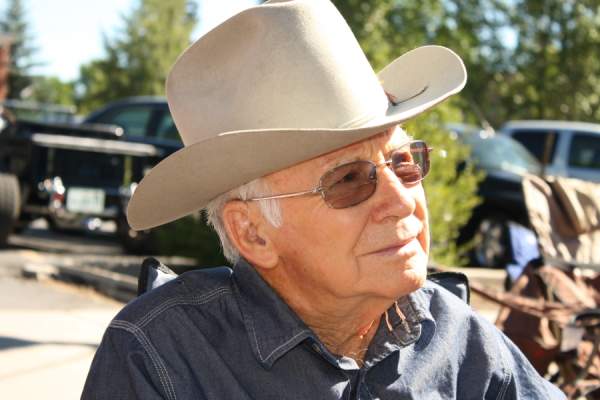 
Herbert Allen
Panguitch, Utah
Herbert Jennings Allen, our loving husband, dad, grandfather, great-grandfather, and hero to so many passed away peacefully at home in Panguitch, Utah on February 11, 2021. Herb was born in Escalante, Utah on July 10, 1925 to Heber Jennings and Mildred Griffen Allen. He had an older sister, Irene, as well as a younger brother, Rodney, who only lived a short while.
Growing up in Escalante, Herb enjoyed riding horses, playing with cousins, and helping his dad on the ranch. He was a cowboy through and through and, like any cowboy, loved his horses and loved the red sand and red rock country he called home.
Herb graduated from Escalante High in 1943 and immediately tried to join the army, but was turned down because of a bad hip. Not one to take “no” for an answer and with a determination to serve his country and fellow man, he tried to enlist a second time, and, after realizing he wasn’t going to go away, the army accepted him. He was trained as a medic and was sent to the Asian Pacific Theater toward the end of WWII. He spent time in the Philippines and was one of the first troops to enter Japan, where he witnessed, firsthand, the devastating aftermath of the atomic bombs. He served his country honorably, and his time doing so had a profound and lasting impact on his life. A true patriot throughout his life, he loved Veteran’s Day and always attended the programs at Panguitch Elementary. Herb was a good and loyal friend and kept in touch with his surviving army buddies until his passing. Now, he reunites with many of them.
After coming home from the war, he met his sweetheart, Norine Nixon, who was living with her grandparents and working in town. She caught his heart immediately and will hold it forever. They were married on August 28, 1948. There were later sealed in the Salt Lake Temple. They had five children: Kathy Peterson (Kent), Marilyn Marshall (Steven), Russ Allen (Jill), Jim Allen, and Lisa Sinclair (Rodger). They enjoyed an entire lifetime together and were happily married for 72+ years.
Herb graduated from University of Utah and was a Utah man to the end. He took his first job at the Employment Security Office in Salt Lake City. To know Herb is to feel loved by him. He did not have an unkind, judgmental, or disingenuous bone in his body. Herb was talented at his profession because he loved people and was always unconditionally kind and approachable. He later transferred to the Job Service Office in Panguitch, Utah and became the manager of the office over Garfield, Kane, and Piute counties. He was in Panguitch for 17 years before he transferred to the St. George office and worked his last few years there before retiring and spending the next 33 years in the warm sun with his sweetheart, Norine. He was an incredibly hard worker and taught his kids and grandkids the importance of an honest days work.
He loved meeting his friends at McDonald’s every morning for coffee and a chat and had many good and loyal friends there.
Herb dedicated his life to supporting his kids and grandkids, even traveling hundreds of miles to attend sporting, dance, music, or other events. His heart was tender and he often watched on with tears in his eyes as he celebrated the talents and successes of the family he loved. You might be related to Herb if your eyes well with tears of joy at the mere thought of your family. Herb loved with all of his heart and we him with all of our hearts.
Survived by his wife; children; 19 grandchildren, 56 great-grandchildren, 2 great-great-grandchildren with another on the way.  Preceded in death by his parents, brother and sister.
Funeral services will be held on Saturday, February 20, 2021 at 1:00 p.m. in the Panguitch Stake Center where friends may call from 11:00 a.m to 12:30 p.m. Buriall will be in the Panguitch City Cemetery with military honors by the Panguitch American Legion Post #25 and Utah Honor Guard.  Live streaming of the services and online guestbook can be found at www.maglebymortuary.com under Herb’s obituary. Due to COVID-19 all attendees must wear a mask and adhere to social distancing guidelines.  Funeral Directors: Magleby Mortuary, Richfield, Salina and Manti.

To order memorial trees or send flowers to the family in memory of Herbert Jennings Allen, please visit our flower store.