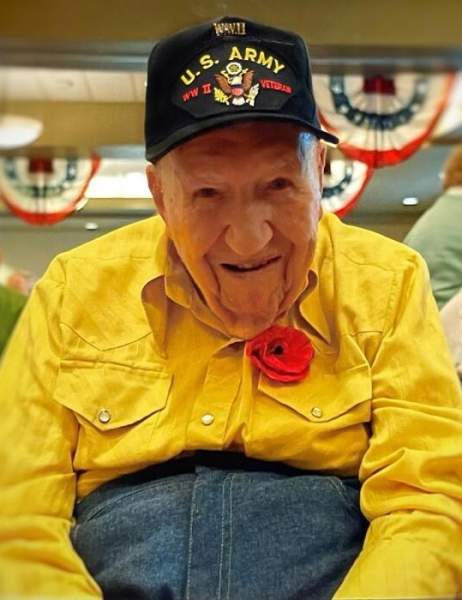 John Rudolph Frey has gone home to his family waiting for him, at the young age of 102! He passed away on January 18, 2021 in Payson.  John was born to Adolph and Lila Landreth Frey in Ogden, UT on June 7, 1918. The oldest of three children with two sisters, Marie Oden and husband Roy (both deceased), and Ann Hurst and husband Bud (deceased).
The family soon moved to Lancaster, California where he was raised on the family ranch.

John was married for a short time and had three young children. He then met his second wife, Lois Ostro. John and Lois were married on May 30, 1952. Lois became an instant mother to John Rudolph Frey JR, Adalanto, CA; and wife Millie; Anna McDonald, Pensacola, FL; and husband Chester (deceased) and Bonnie Leigh Domby and husband Frank (both deceased).
John and Lois had three more children: Jeffrey Frey and wife Michelle, Daytona Beach, FL; Janice Carlson and husband Gary, Manti, UT; and Judi Coleman and husband Keith, N. Fort Myers, FL. His family of six were all raised in Las Vegas, Nevada where John initially owned and operated his own garage "John's Other Garage" which is where he met Lois after her car broke down on her way to relocate to California from New York!

John served honorably in the United States Army during WWII. He was discharged when the war ended and went back to his family.

As the family was growing, John decided to sell his garage and go to work as a machinist/welder at American Potash, later becoming Kerr McGee Chemical Corp, a large producer of ammonium perchlorate which is rocket fuel used in the U.S. missile industry.  John worked for Kerr McGee for 35 years and retired in 1983. He kept doing what he had always been doing - welding, creating, repairing, fixing - You name it he's probably done it!  He was our 'John' of all trades - master of none!  Our little energizer bunny that never quit!
His handle on the CB radio was Papa Fix-it, of course that went along with our mother’s handle of Mama Break-it.

Lois passed away in 1985 and John married Inga Johnson from Minnesota the following year. He had met her through her son-in-law in Moapa, NV where he had been employed to weld all their equipment for their mining operation.  John and Inga then moved to her house in Bemidji, MN where he continued to do the same thing - work, build, create ...

Inga moved to an assisted living in 2003, John wasn't ready for confinement so he packed up to Manti and bought the house next door to his daughter, Janice. Inga passed away in 2015 at the age of 101.  He outlived three wives but never stopped looking for the fourth to come along!

John was baptized into the Jehovah Witness religion at 92. He has many friends from the Kingdom Hall in Mt. Pleasant who will miss his gentle nature and infectious smile.
He's never known a stranger nor not helped someone in need. Countless times Dad would have people over for dinner that had no where else to go. He was and will always be known to us as the man who helped everyone through his many examples of selfless service.

John loved taking a bath in his jetted tub every night and soaking so long he’d be a prune!! Ultimately that bath got the better of him as he accidentally turned the hot water on first and burnt his feet. Since he was over 100 years old we decided he should heal at the Bennion’s Veteran’s Home in Payson which became his home away from home.  He spent the last 2½  years there and enjoyed the title of their first centenarian and may very well hold the honor of the oldest for awhile. John was very loved by all the staff. They are great, kind and loving people. They even helped orchestrate a 101 cards for a 101 year old - which led to almost 9000 cards! John was completely humbled by all the love that came from all around the world and even President Trump!

It’s difficult to condense over 102 years into a few paragraphs about Johns life.  John has left a legacy of selfless love and doing what’s right to his 6 children, 11 grandchildren, 13 great- grandchildren and 7 great-great-grandchildren.  He had the prettiest blue twinkling eyes that were always shining when family was around! He’ll be missed by all of us still here but he’s surely being bombarded by those many angels who were waiting to take him home.

He was preceded in death by his wives, Lois and Inga; sister, Marie; daughter, Bonnie;  grandson, Brian; and great-grandson, Micah; and other loved ones.

Funeral services will be held Friday, January 29, 2021 at 2:00 p.m. in the Magleby Mortuary in Manti, where friends may call after 1:00 p.m. Live streaming of the services and online guestbook can be found at www.maglebymortuary.com Due to COVID-19, attendees are required to wear a mask and adhere to social distancing guidelines.  Funeral Directors: Magleby Mortuary, Richfield, Salina and Manti.

To order memorial trees or send flowers to the family in memory of John R Frey, please visit our flower store.