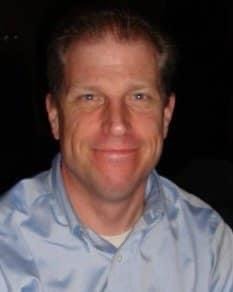 Our beloved John William Gay, 52, died January 13, 2023, with family by his side in Tulsa, Oklahoma.  He was born April 6, 1970, in Salt Lake City, the son of Farral D. and Norene Whitehead Gay.  John grew up in West Jordan, UT; Greenwood, IN; Kettering, OH; Concord, CA; and Elkhorn, WI; and enjoyed running cross-country and track.  He graduated from Elkhorn High School.
He served a mission for The Church of Jesus Christ of Latter-day Saints in southern Idaho and attended Ricks College in Rexburg, ID, where he met Suzette Kemp.  They were married in 1995 in the Manti Temple and were blessed with a daughter, Amanda Joy.  They were later divorced.  John moved to Oklahoma with his daughter and in 1999 married Posha Lee Hunnicutt, welcoming her daughter, Geneva, as a beloved daughter of his own.  They also had a much-loved son, John William II.  They later divorced.
John worked in construction, appliance assembly, as a machine operator, and in sales and customer service. He loved woodworking and became very skilled, making toys for his children, nieces and nephews and carving intricate chests, picture frames and other pieces.  He took great pleasure in having made wooden picture frames for LDS temples.  John enjoyed teaching at church and also was a great storyteller, delighting his younger sisters and later his own children with tales of ongoing adventure. Since his passing, his family has been inundated with accounts from many different people of his warm kindness.
He is survived by daughter, Amanda Joy (Braxton) Merzlock; son, John William Gay II; and step-daughter, Geneva King (Loai Adhami); parents; and by his brothers and sisters: MaryJan (Casey) Munger, David (Natalie) Gay, Robert (Jackie) Gay, Alan Gay, Andrea Gay and Melissa (Jon) McLaughlin; and much-loved aunts, uncles, and cousins.
Preceded in death by his grandparents: Dee and Hannah Gay, Calvert and Norma Whitehead.
Funeral services will be held Saturday, January 28, 2023 at 11:00 a.m. in the Joseph Ward Chapel, 75 N. Center St., in Elsinore, where friends may call from  9:00 – 10:30 a.m. Burial will be in the Monroe City Cemetery. Live streaming of the services can be found at www.maglebymortuary.com below John’s obituary the day of the services. Funeral Directors: Magleby Mortuary, Richfield, Salina and Manti.
John requested that people wear spring colors to his funeral.

To order memorial trees or send flowers to the family in memory of John William Gay, please visit our flower store.
Gay.program.final.pdf
Open