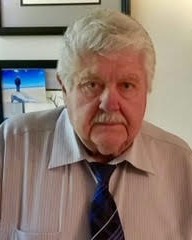 On Saturday, December 3, 2022, a loving partner and father of three, Kent Elgin Mellor, passed away at the age of 84. Born to Elgin Payne and Maurine Westenskow Mellor of Fayette Utah, Kent was born on September 9, 1938, in Fayette.
Kent attended BYU where he studied geology. Along with being an avid rockhound, Kent enjoyed fishing and hunting where he would spend much of his free time exploring the Boulder Mountains. He continued his love of geology by mapping out a coal mine in Salina Canyon and trying out his hand as a gold miner in the Kimberly Mountains.  While it wasn’t his favorite, he also helped with the family business herding cattle with his father and brother.
Kent married Fern Christensen on December 28, 1957, later divorced. He then met Nella Serrano. Together they’ve enjoyed numerous trips to Mexico, Arizona, Idaho and the Great Basin National Park looking for pine nuts.
Kent is survived by his children: Blake (Kathy) Mellor, Kathryn (Don) Peterson, Dennis Mellor; grandchildren: Robert and Richard Mellor, and Krystal Koford; great-grandchildren: James, Sophie, Chloe, Miriam Mellor, and Atreyu Elmore; and his sister, Jean (Clyde) Rosenvall.
Proceeded in death by his parents; brother, Keith (Carol) Mellor; and sister Doris (Arlo) Jensen.
Graveside services and interment will be held, Tuesday, December 13, 2022 at 12:00 Noon in the Gunnison City Cemetery. Friends may call at the Gunnison Stake Center, 80 West Center, from 10:00 - 11:30 a.m. Funeral Directors: Magleby Mortuary, Richfield, Salina and Manti. Online guestbook at www.maglebymortuary.com

To order memorial trees or send flowers to the family in memory of Kent Elgin Mellor, please visit our flower store.