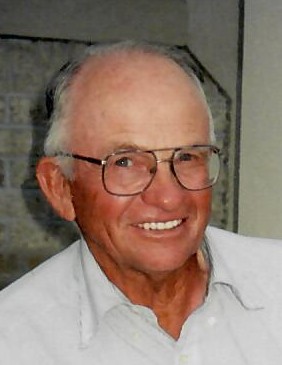 Kurt Ned Sorenson passed from this life on March 5, 2022 at the Gunnison Valley Hospital surrounded by his loving wife Lois and their sons, Douglas and Bruce. Kurt was born on July 18, 1929 in Centerfield, Utah, the seventh child of Peter Marlin and Sarah Lillian Jensen Sorenson.

Kurt had a happy childhood growing up in Centerfield surrounded by lots of family and friends.  His father farmed in Axtell and Clarion.  They were the first family to introduce the Holstein breed of cattle into the area dairy farms.  Kurt spent many happy days working alongside his father on the family farm.

Kurt attended local schools graduating with the Gunnison Valley High School Class of 1947.  After high school he spent two years at Utah State University studying Animal Husbandry.  His goal was to become the best farmer he could possibly be and there was a lot to learn.

During his high school years, while looking for a prom date, he met Lois Donna Sorensen.  After that first date they started dating and going to dances.  Pretty soon they ended up liking each other enough to get married!  They were married on December 30, 1950 in Centerfield, Utah.  Shortly thereafter Kurt was drafted into the Army and was sent to Fort Lewis, Washington.  In June, Lois’s parents took her to Washington to join him and they lived there until Lois returned home to deliver their first son, Russell in 1953.

Kurt was blessed to be born into a large family.  He had four brothers and three sisters.  Kurt was especially close with his younger brother, Robert.  In 1957 their father wanted to sell the family dairy farm and retire.  Kurt and Robert decided to purchase the dairy and became partners in the dairy farming business.  Many happy hours were spent in the dairy barn milking cows and raising their families.

Kurt expanded his farming ventures and began raising beef cattle and growing alfalfa.   Together with his sons, they farm many acres and raise an excellent herd of beef cattle.  One of Kurt’s very favorite times of year was herding their cows onto the summer range up Willow Creek.  The annual cattle drive was the highlight of the year for the whole extended family.  Brothers, uncles, cousins and friends were invited to ride along.  The culmination of the day was a big family feast held on Jack’s flat with Kurt and Lois’s famous dutch oven stew as the main dish.  So many cherished memories were made during these annual cattle drives. Kurt was a man of service.  He used his talents of organization and bookkeeping in many different capacities.  He was a member of the American Legion for over 60 years.  He served on the Centerfield City Council, Gunnison Valley Bank Board and was the financial secretary  in the Centerfield Ward for six years and spent an additional two years as the statistical clerk. Kurt and Lois served on the Centerfield Old Folks committee for 11 years.  They enjoyed honoring the people of Centerfield and had lots of fun with the other committee members.

Kurt was very knowledgeable when it came to water and irrigation systems.  He was recognized for 30 years of dedicated leadership to the Piute Reservoir and Irrigation company where he served as president of the board from 1991 - 2007.  He also represented Sanpete County on the Sevier River Water Users Board where they worked to automate the Sevier River.  He served on this board from 1996 - 2007 working to improve irrigation systems throughout Sanpete and Sevier Counties.

Kurt loved his family.  They were the top priority in his life.  He taught his sons, Russell, Douglas and Bruce, the value of hard work.  His boys were blessed to spend their days and adult lives working side by side with their father.  Their farms are among the best in the valley and they are proud to be caring on the family tradition of farming.  Kurt’s daughter Stacy was a crowning jewel in the family.  He loved her with all his heart.  He would admit that he probably spoiled her a bit but he wouldn’t have changed a thing.

Kurt is survived by his loving wife of 71 years, Lois; and their two sons: Douglas K. Sorenson and Bruce S. Sorenson, all of Centerfield; sister-in-law, Linda Sorenson Wall.

Funeral services will be held Friday, March 11, 2022 at 1:00 p.m.  in the Centerfield 1st  Ward where friends may call from 11:30 a.m. to 12:30 p.m.  Interment will be at the Centerfield City Cemetery with military honors by the Centerfield American Legion Post #105 and Utah Honor Guard.  Funeral Directors: Magleby Mortuary, Richfield, Salina and Manti. Online guestbook at www.maglebymortuary.com

To send flowers to the family or plant a tree in memory of Kurt, please visit our floral store.

To order memorial trees or send flowers to the family in memory of Kurt Ned Sorenson, please visit our flower store.