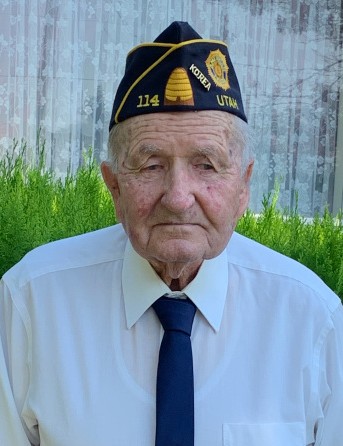 Lane S Liston, 88, passed away suddenly on November 27, 2020. He was born on May 6, 1932 in Escalante to Wilford and Verda Spencer Liston. He was one of three children: an older brother Donald, and a twin brother, Lynn. He was a member of The Church of Jesus Christ of Latter-day Saints. Lane spent much of his youth learning to farm and raise cattle with his father.

Lane graduated from Escalante High School. After graduation he was drafted in to the Army in 1952 and served the country he loved in the Korean War until 1954.

After returning home he began dating Geraldine Mecham. She became his sweetheart and eternal companion on January 12, 1957. The couple made their home in Escalante. The couple was blessed with two children: Gary Lane and Sherri Lyn. Lane worked for the Sawmill, Forest Service, Kelley Construction and Lyman Construction. They remained in Escalante until their deaths. Geraldine preceded him in death July 20, 2020.

Lane treasured the friendships he made throughout his life and reminisced often about his experiences with his good friends. He loved his daily trips to the gas station for his morning cup of coffee, half a muffin and a chance to solve the world’s problems.

Lane was an active member of the Lions Club and the American Legion throughout his life. He loved serving his community. He was honored each year to provide them with the community’s best gingerbread house at Christmas. The community loved coming by to see the house all lit up in red.

After his retirement from the Forest Service, Lane volunteered at the Escalante Senior Center, delivering and providing transportation for the seniors. He enjoyed providing that service for many years.

Lane loved to work the land, raising hay and cattle. He most treasured the time spent working with his children and grandchildren at his side.

He leaves a wonderful posterity: children:  Gary (Sandy) Liston and Sherri (Dan) Meisenbach; 7 grandchildren and 21 great-grandchildren. Lane is preceded in death by his sweetheart, Geraldine, 2 brothers and his parents.

Private family funeral services will be held on Monday, December 7, 2020 at 11:00 in the Escalante Stake Center. A public viewing will be held at the Escalante Cemetery following the services at 12:00 Noon. Burial will be in the Escalante City Cemetery with military honors by the Escalante American Legion Post #0114 and Utah Honor Guard. Due to COVID-19, all attendees must wear masks and social distance. Live streaming of the services and on-line guestbook can be found at www.maglebymortuary.com under Lane’s obituary. Funeral Directors: Magleby Mortuary, Richfield, Salina and Manti.

To plant a tree in memory of Lane S. Liston, please click here.

To order memorial trees or send flowers to the family in memory of Lane S. Liston, please visit our flower store.