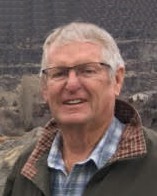 Maynard Stenberg was peacefully reunited with the love of his life, his wife Kathy in heaven, the afternoon of October 23, 2022 in Centerfield. Maynard was born July 1, 1937 to his parents, James Albert and Rhoda Stenberg in Mayfield, Utah, the youngest child in a family of six children. Maynard proudly served his country as a solider for the United States Military serving time in Korea from 1957-1959.
After Maynard's military service he returned home to marry the love of his life, Kathy Jensen on June 21, 1959. Maynard was father to one son, Bick Maynard Stenberg.
In 1960 Maynard began working for Boyles Bros. Drilling Company. This called Maynard and his family to relocate to Nevada, then called Maynard to numerous states and to countries including Africa, Australia, and China.
In 1998 Maynard retired from Boyles Bros. Drilling Company, but this did not slow down Maynard's busy and hard-working lifestyle. After living a crowded life in the city, Maynard and Kathy returned home to live out their golden years.
Maynard enjoyed many things in life such as gardening and visiting with friends and family but Maynard's truest passion was woodworking. He was a proud member of the local turners group in Mayfield. Maynard enjoyed collecting all types of wood and turning it into masterful pieces of art that he gladly gifted to those he cherished.
Maynard's son, Bick, would like to thank Gunnison Valley Hospice, Mission at Community Rehab in Centerfield, and Maynard's nieces and nephews for providing outstanding loving care.
Maynard is survived by his son, Bick Maynard Stenberg and wife, Lisa Marie; granddaughter, Brittany Dawn Austin and husband, Joey Lynn; and dear friend, Rae Hansen.
He is also preceded by his parents.
Graveside services will be held Friday, October 28, 2022 at 2:00 p.m. in the Mayfield Cemetery with military honors by the Centerfield American Legion Post #105 and Utah Honor Guard. Funeral Directors: Magleby Mortuary, Richfield, Salina and Manti. Online guestbook at www.maglebymortuary.com

To order memorial trees or send flowers to the family in memory of Maynard Stenberg, please visit our flower store.