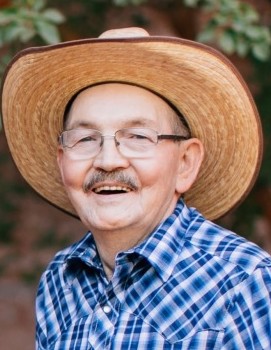 Norman Russell Hutchings, 74, passed away November 7, 2020 at his home in Littlefield, AZ. He was born December 5, 1945 in Beaver, Utah to Norman and Audrey Bradshaw Hutchings.

He married Patricia Johnston. They had two children: Derryl and Steaven Guy. Later Divorced. Married Melinda Brewer and they had four children: Dillan, Weston, Michelle and Cory. Later divorced. He married Deborah Sheryle Rayburn and joining the family with her two children: Candice and Stephen.

Russell is one who wore many hats, it was usually a cowboy hat, during his working career. He was one who loved horses and learned at a very young age the art of a farrier and later became a jockey at the Canyon Breeze Race Track. He developed a skill as a barber and he loved his country where he served as a member of the National Guard. His time serving his country pushed him to work hard and later become a deputy sheriff.

Russell was a man that loved working with tools and moved to a career in the construction field. He later went into the career as a truck driver for Barney Trucking and received the nickname of "Speedy"—not because he was fast. He also owned "Hutchings Trucking".

He spent many summers on the mountain working with a chainsaw cutting loads cedar posts for farmers and firewood for his family. Sometimes would have enough wood to share with those that needed it. Russell was a hard worker and he loved his family. Many family vacations were spent on the mountain camping and teaching his kids how to hunt and fish. He spent hours untangling lines and baiting hooks. The love of the outdoors was something he instilled into his children. The teaching he provided to his children are ones that are now being passed down to his grandchildren.

He loved to share Bazooka bubble gum and sneak a coke from the fridge for all his grandkids.

He lived on the old road where he had a variety of farm animals. Russell loved sharing the love for animals with his grandkids. He would spend hours out with the horses, and chickens where he felt enjoyment.

Russell had a big heart and a hard working hand. He also had a funny side for his grandkids—he would do a ear wiggle or a funny face. Gardening was something he enjoyed and eating fresh vegtables from the garden.

Funeral services will be held Friday, November 13, 2020 at 11:00 a.m. in the Monroe 1st Ward Chapel. Due to COVID-19 you will be required to wear a mask and there will be a restriction of 99 attendees for the funeral services. Friends may call at the ward chapel on Friday from 9:30 -10:30. Burial will be with Military Rites in the Monroe City Cemetery. Funeral Directors: Magleby Mortuary, Richfield, Salina and Manti. Online guestbook and live streaming of the funeral services can be found at www.maglebymortuary.com under Russell’s obituary.

To order memorial trees or send flowers to the family in memory of Norman Russell Hutchings, please visit our flower store.