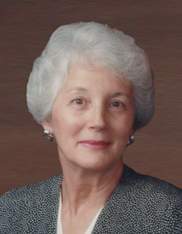 Ruby English Warner, 92, of South Jordan and of Glenwood, Utah passed away on August 18, 2021 at her home in South Jordan. She was born on January 26, 1929 in Wallace, North Carolina to James Fitzhugh and Elvie Barnhill English.

Ruby was born premature and not thought to survive the night but like any country girl she grew up strong and was a big help on the family tobacco farm. She was taught to work hard at everything she did whether it was planting and harvesting or school work. She had a dream of going to college so with pluck and determination got herself to Brigham Young University where she later joined The Church of Jesus Christ of Latter-day Saints, graduated with a degree in Elementary Education and met and married John D. Warner. They were married for 65 years and had 6 children.

Ruby had an adventurous soul and did a lot of traveling in her life visiting many countries. She was also game to go camping all throughout the western states with John and fishing with their grandchildren. However, her life-long favorite pastime was reading and you could always find her with a book in her hands.

She is survived by her children: Doug Warner, Debbie (Richard) Rucker, Diane Fullerton, Dwight (Lynda) Warner, Dixie (Shawn) Henrie. Ruby has 13 grandchildren and 36 great-grandchildren. She was preceded in death by her husband, John; son, David; her parents; and her siblings.

Funeral services will be held Saturday, August 28, 2021 at 11:00 am in the Magleby Mortuary Chapel in Richfield where friends may call on Saturday from 9:30-10:30 a.m. Burial will be in the Richfield City Cemetery. Live streaming of the services and online guestbook can be found at www.maglebymortuary.com under Ruby’s obituary.  Funeral Directors: Magleby Mortuary, Richfield, Salina and Manti.

The family would like to give special thanks to Legacy Retirement and Legacy House of South Jordan for the amazing care they provided Ruby and the loving community she was a part of.

To order memorial trees or send flowers to the family in memory of Ruby Warner, please visit our flower store.