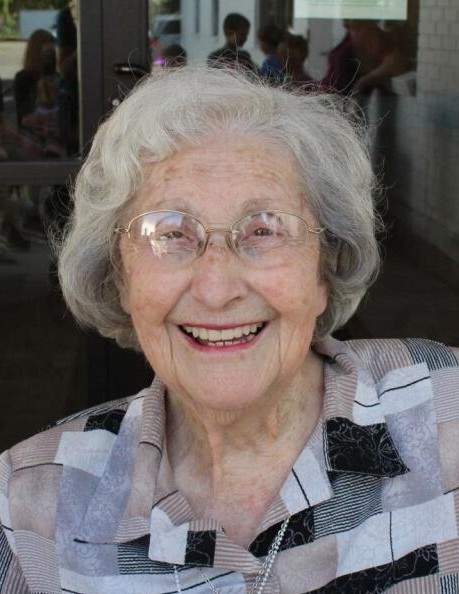 Ruth M. Christiansen, 86, passed away August 2, 2021 in Nephi, Utah.  She was born May 31, 1935 in Castle Dale, Utah to Charles and Ada Fay Jeffs Magnuson.  She married Norman Floyd Dennis  July 3, 1954.  They had four children together: Diane, Michael Norman “Mike”, Boyd Wayne (died 1969), Louise (died 1995).  Norman died September 8, 1961 leaving Ruth a widow with 3 small children ages 6, 4½, and 3½  years old, as well as her being 7 months pregnant with Louise.  A year later, on August 27, 1962, Ruth was married to Galen B. Christiansen.   He brought 2 sons, Jerry and Shane, from a previous marriage to the mix, and although they lived with their mother, they were always part of the family also.  Galen spent most of his life in Manti, Utah except for 5 years when he lived in Salt Lake, where he met Ruth when she had a car problem and went to the shop where he worked.  The rest is history as they say.  Ruth and all 4 of her children were extremely blessed and grateful that Galen came into their lives.  We were ALWAYS important to him and were HIS kids (even though he made sure not to take Norman's place as our blood father.)  Ruth and Galen were sealed in the Manti LDS Temple in 1972.  They went on to add two sons, Gerald and McCrae.  We were all raised as one family even though we had different last names.  Galen passed away May 21, 2011.

Ruth was raised in Castle Dale and was the youngest of 10 children.  When she was almost 9 months old, her mother died.  Not being able to take care of a child that young, she was raised by her Aunt Hilma and Uncle Elmer Jeffs (Ruth's mom's brother and his wife).  They treated her as their own but were abundantly welcoming of Ruth's biological siblings and their families.  She was raised with two families in the same very small town of Castle Dale.

She is survived by her children: Diane D. (Bruce) Jenkins, Eagle Mountain; Mike (Amy) Dennis, Gerald (Jennifer) Christiansen, and McCrae (Linda) Christiansen, all of Manti; Jerry (Debbie) Holbrook   Shane (Michelle) Holbrook, both of Bakersfield, CA; and her sister, Elda Brinkerhoff, Grantsville.  She also has 18 grandchildren and a bunch of great- grandchildren, all who love her VERY much!

She was preceded in death by both husbands, two children, one grandson, Kade Christiansen; her parents; Elmer and Hilma Jeffs; 8 of her Magnuson siblings, who are Bruce, Twila M. Clark, Jennise “Jennie” M. Butler Kaufman, Valora M. Nolan, Paul, Norma M. Page, and Jack; as well as all of  Hilma and Elmer's children.

To order memorial trees or send flowers to the family in memory of Ruth Christiansen, please visit our flower store.