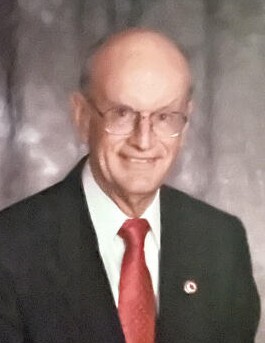 Steven Howard Peterson, beloved husband, father, and grandpa returned to his heavenly home on January 21, 2022, at the age of 78, after a long health battle.  A heart-filled thanks for the tender care provided by the Beehive Memory Care and Applegate Hospice services of St. George, UT.

Steve was born on May 8, 1943, the second child of Howard Leon Peterson and Donetta Lewis in Richfield, UT.  Raised in Monroe, Steve was active, driven, a born leader, and excelled in athletics.  He could pitch a curve ball before the age of 12.  As children, Steve and his friends competed in a stick horse rodeo and his sister Madelyn was the rodeo queen.  In high school,  Steve played basketball and baseball.  Baseball was his passion, he batted left-handed and threw right.  As a senior, he pitched a no-hitter against Gunnison High School.  In high school,  Steve was selected as Most Preferred Man, elected as student body president, and graduated from South Sevier in 1961.

Steve dearly loved his mother Donetta and credits her for teaching him how to work.  He was an obedient child and was heartbroken when she passed away.  Steve was 16 years old at the time.  Family, friends, teachers, and coaches stepped in to love, mentor, and support Steve.  He finished high school while living with Grandpa and Grandma Lewis in Richfield.

Steve married his high school sweetheart, Sylvia Staples, on September 20, 1961, in Central, UT. Steve and Sylvia moved to Ephraim where he attended Snow College on a Leadership and Baseball Scholarship.  During his first year, Steve pitched a doubleheader against Cedar City and Dixie College, and his arm was never the same after that.  His sophomore year at Snow, he played outfield and third base and batted over 300. Steve graduated from Snow College in 1963 and moved to Logan to attend Utah State University.  After home teachers invited them, Steve and Sylvia became active in The Church of Jesus Christ of Latter-day Saints and were sealed along with their daughter Shelly in the Logan Temple on June 8, 1964.  A commitment to live the gospel of Jesus Christ took root and together they began their life of dedicated service.

Steve graduated with a Bachelor of Science in Business and Distributive Education from Utah State and taught at Parowan and Cedar City High Schools in 1965.  On his first day of teaching at Parowan High, he dropped his chalk, bent over to pick it up, and his pants ripped just before the bell rang.  Steve stapled his pants together on the inside and ran back to class.  He described his first day teaching as an “itchy bother.”  His career progressed as the business teacher at Sevier Valley Tech in Richfield, and then Business Director for the Sevier County School District.  Steve took a sabbatical leave in 1970 to return to Utah State for graduate school.  Steve, Sylvia, and their family moved to Junction, UT in March 1972 where Steve held his first Superintendent position in Piute County School District.  Steve was awarded his Education Doctorate Degree in Administration in June 1972.   The family lived in Junction, Kingston, and Circleville during four years at Piute.   Steve served as a counselor in the Panguitch Stake to President Whitaker.  Their 6th child, and only son, was born while living in Circleville and named after Steve.

The family moved to Gila Bend, AZ in 1975 where Steve was the Superintendent of Schools.   As a skilled communicator, Steve navigated his way through a dispute with the Papago Indian Chief and the School District.  A humble apology resulted in 160 Indian children returning to school.  Steve taught early morning seminary and served in the branch presidency in Gila Bend.

In 1977 the family returned to Utah where Steve was hired as Director of Area Vocational Programs for Dixie College and Washington County Schools in St. George.  His love of Dixie was born.  Steve became the Assistant Superintendent in 1979 and later was hired as the  Superintendent of Washington County Schools from 1984 - 1996.  Growth in Dixie exploded and under his leadership, bond elections were successful and several new schools were built.   In 1993, Steve was elected Utah's 1993 School Superintendent of the Year.  Steve served as Rotary president, stake executive secretary to President Metcalf, and bishop and stake president in Bloomington.  When Steve was released as stake president, he bore his testimony of our Savior Jesus Christ and expressed his love to the saints.

Steve spent the fall of 1996 as the Principal/Superintendent in Littlefield, AZ.  While there he wrote a grant.  The Governor of Arizona presented the successful grant which awarded over $3,000,000 to the Littlefield School District for a new New Elementary School.

In January 1997, Steve accepted a position as the Executive Director of the Utah School Superintendents Association and Deputy Executive Director for the Utah School Boards Association in 1997-2003 and 2005-2010. They moved to the Salt Lake City area where Steve worked with superintendents across the state and with the legislature on issues and legislation affecting education.  Steve and Sylvia served a mission together in Moscow, Russia in 2003 where Steve was an Area Executive Secretary. Steve said, “It has truly been the hardest, but yet the best 18 months of our lives.”

In 2011, Steve and Sylvia moved into a home they built where they planned to “retire” and spend the rest of their lives. They were so excited to return to the Sevier County area where they grew up and reunite with friends and family.  Steve loved the outdoors, especially gardening, fishing, and hunting.  Steve was a dedicated home teacher, and he and Sylvia loved to attend the Manti Temple together. Over time, Steve’s health declined to the point where they sold their home and returned to St. George to be closer to children and medical services.

Steve had the gift to love and lift others. Each of his children felt that he loved them best. His grandchildren adored him.  Steve didn’t know a stranger.  He was known to pick up hitchhikers when he “felt good about it.” People loved him back, from all walks of life.  Steve opened his home to many family members and others in need over the years.  All were welcome.

Steve overcame much adversity in his life, more than most ever knew.  He loved life and he lived life to the fullest. His example encouraged all to be better, to do better.   Steve tarried a bit longer to help the rest of us along our mortal journey.   He was one of the very best.

He is survived by his the love of his life Sylvia; their children: Shelly, Stefenee, Shauri, Staci, Shauna, Steven, Sunnie, Sandi; 29 grandchildren, and 20 great-grandchildren; sister, Madelyn Semkins; brother, John Swain. Steve is preceded in death by his parents; grandparents; and two brothers.

Rest in peace Daddy, and may God keep you in His care and keeping until we meet again.

Funeral services will be held Friday, January 28, 2022 at 10:00 a.m. in the Bloomington Stake Center on North Brigham Road in St. George. Friends may call for visitation at Metcalf Mortuary Thursday evening from 5-7 p.m. Burial will be in the Tonaquint Cemetery at 1777 S. Dixie Dr. Information courtesy of Magleby Mortuary, Richfield, Salina and Manti.

To order memorial trees or send flowers to the family in memory of Steven H Peterson, please visit our flower store.